It's been an interesting week for cycling. 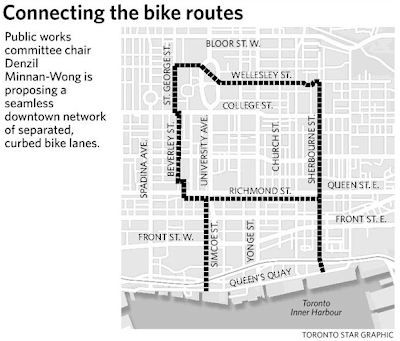 Today the Star ran an article about a plan to build curbs to separate bike lanes in the downtown.  Denzil Minnan-Wong, the new chair of the public works and infrastructure committee, has come out in support of building a network of separated bike lanes along major streets.  Some streets that already have space carved out with bike lanes - such as Sherbourne - will get curbs separating cars from bikes. Other streets without bike lanes - such as Richmond - may get bi-directional bike lanes. Of course, this plan must pass through the committee and then council, but it's great news for Toronto!


Upon some research this week about 'raised lanes' I found out that Guelph has begun construction on Ontario's first raised bike lane. Separated from car traffic by raising the lane like a sidewalk, this lane is very similar to the type seen in Copenhagen.

A post on Copenhagenize today rails on the Bank Street BIA in Ottawa for opposing the planned physically separated bike infrastructure, which cited safety concerns as their reason. Apparently the study cited in support, which highlighted an increase in accidents after Copenhagen built separated lanes, came from the vehicular cycling community that argues vigorously against cycling infrastructure.  Vehicular cyclists advocate for bikes to be treated the same as cars - certainly not a position supported by us here at Cycle Toronto.

Copenhagenize also linked to the Star article noted above.