Roads should be used for the movement of people not cars 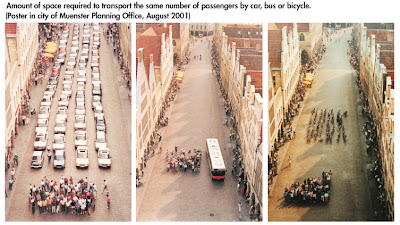 I love this picture! It so clearly illustrates how a road can be used most efficiently to move people when the concern is moving people rather than cars. This brings me to the issue of this post, namely: What is the purpose of a road? And, how does the design of our roads shape its use? Further down in this post I'll ask the question of whether or not Toronto, in particular, is living up to its stated policy about the use of roads.


The Ontario Highway Traffic Act says that roads are for the passage of vehicles.


“highway” includes a common and public highway, street, avenue, parkway, driveway, square, place, bridge, viaduct or trestle, any part of which is intended for or used by the general public for the passage of vehicles and includes the area between the lateral property lines thereof; (“voie publique”) - HTA section 1

A "vehicle" includes a car and a bike, but not a street car. And, a "highway" apparently does not include a parking lot, at least in Ontario. In the case of R. v. Tresham it was decided by a judge of the Ontario Court of Justice (General Division) that:


The term "highway", as defined under the Ontario Highway Traffic Act, although a fairly expansive definition unlike similar legislation in other provinces, does not expressly include the term "parking lot". While the definition does include the term "place" and specifies "any part of which is intended for or used by the general public for the passage of vehicles," I do not find that this provision applies to a parking lot. It states for the "passage" of vehicles and not for the "parking" of vehicles. In this regard the Supreme Court of Canada decision in Mansour, supra, applies, that the definition of highway under the Ontario Highway Traffic Act "does not embrace the concept of a parking lot."

This case was, among other things, about whether an actual parking lot would fall under the definition of "highway" rather than the issue of on-street parking, but this judicial interpretation of the term "highway" may give credence to the argument that roads are meant for the movement of vehicles rather than the parking of vehicles.

The Highway Traffic Act defines a "highway" but doesn't regulate its use insofar as efficiency is concerned. So, for example, it doesn't say that roads should be used in the most efficient way to transport people. Nor does it say anything about equality of use between different kinds of vehicles. While these questions are dealt with in both Ontario's and Toronto's official policy documents, they don't exactly contradict the HTA. 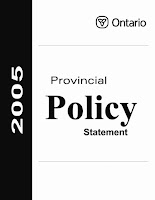 Transportation systems should be provided which are safe, energy efficient, facilitate the movement of people and goods, and are appropriate to address projected needs. (1.6.5.1)

A land use pattern, density and mix of uses should be promoted that minimize the length and number of vehicle trips and support the development of viable choices and plans for public transit and other alternative transportation modes, including commuter rail and bus. (1.6.5.4)

"Transportation systems" refers to a system of corridors and rights-of-way for the movement of people and goods, and includes cycle lanes. On the one hand, this could be taken to mean roads should be used for the movement of people rather vehicles. On the other hand, since "transportation systems" doesn't actually mention anything about roads, maybe this doesn't show a preference for the efficient use of road space by bikes and public transit over the less efficient use of road space - in terms of moving people - by cars. Hmmm. 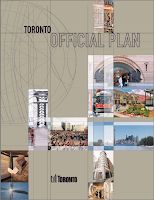 The Toronto Official Plan is more clear. In section 2.4 it states:

In a mature city like Toronto, the emphasis has to be on using the available road space more efficiently to move people instead of vehicles and on looking at how the demand for vehicle travel can be reduced in the first place. Reducing car dependency means being creative and flexible about how we manage urban growth. We have to plan in "next generation" terms to make transit, cycling and walking increasingly attractive alternatives to using the car and to move towards a more sustainable transportation system.


So, at least at the official policy level, Toronto gets the idea of efficient use of road space to move people instead of cars. Whether or not the transformation of our city streets to invite and encourage cyclists, among other more efficient modes of transportation, is happening as fast as we would like or in the way in which we'd like is another story.

But, section 24(1) of the Ontario Planning Act does require that all municipal public works and by-laws conform to that city's official plan. So there is a connection between policy and law so far as land use planning is concerned.