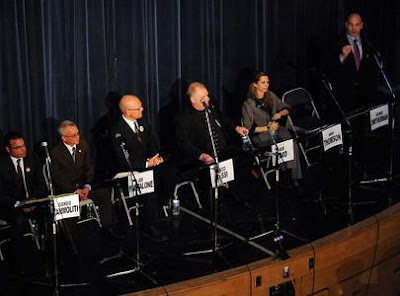 While the news reports tended to characterize the evening as a bit of a circus, the issue of bike lanes came up and below is a recap of what each candidate had to say according to the reports.

Joe Pantalone
Joe is the mayoral candidate who is most supportive of bike lanes and said that bike lanes should be put anywhere that they are safe. He reminded the crowd that cyclists are not "martians" but rather "our kids, our sisters, our brothers".

Giorgio Mammoliti
Giorgio, like a disapproving parent, said he would halt the expansion of bike lanes until cyclists can follow the rules of the road. Previously, Mammoliti had said that he took no issue with bike lanes so long as it wouldn't slow down car traffic.

Rocco Rossi
Rocco has come out as the candidate most opposed to bike lanes especially on a reconstructed Jarvis Street and on major arterial roads in the city. Last night he continued to make the issue a divisive one between cars and bikes by saying that he "can't ask a motorist in gridlock to sit there staring at an empty bike lane".

Rob Ford
Rob, who is a recent addition to the mayoral race, came out in favour of bike lanes in the downtown but not in the suburbs.

Sarah Thomson
Sarah has come out strong as a supporter of public transit, calling for road tolls to pay for expanding the subway system, but she has said little about her stance on bike lanes. Previous reports indicate that she is supportive of bike lanes and is looking into safety concerns.

George Smitherman
While in support of bike lanes, George has said very little about his actual stance or policy intentions on bike lanes in the city. Last night, it appeared that George was more intent on discrediting Rocco than saying anything substantive about his own position.

Brief Analysis:
The media has been pushing a discourse of "war" (as seems to be the case anytime there is a debate about anything) and pitting cyclists against drivers. This is a really unfortunate and destructive way to characterize the issue of bike lanes and how to effectively and efficiently use the available road space in Toronto. The reality is that the streets are chaotic and the City has the responsibility and obligation to ensure a safe and equitable transportation infrastructure. Bike lanes - physically separated bike lanes being the best option - are a solution to this chaos because they would separate cyclists from motorists and provide each user with generally exclusive and safe road space to use.

When thinking about who to support for mayor on the issue of bike lanes we should be drawn to the candidate who, first, recognizes that cyclists aren't going to go away and have a right to safe infrastructure and, second, engages with the issue in a positive and democratic way. This means, a candidate who is supportive of bike lanes (I would really like to see who can come out strong in favour of physically separated lanes) on major arterial roads (i.e. where cyclists are, rather than where motorists would prefer them to be), and a candidate who understands the public process at City Hall of creating bike lanes.

Candidates who say all bike lanes should be halted (Mammoliti) or that the bike lane on Jarvis should not be constructed (Rossi) show a lack of understanding of the processes at City Hall. The Toronto Bike Plan has been in existence for almost a decade and sets out a clear bike lane network plan and is far from being completed. The Jarvis Street reconstruction has gone through many years of design, debate, and public input and it would be greatly counterproductive and wasteful to re-engage with the project all over again. One of the greatest problems of Toronto (not just council, but the whole process) is its inability to get things done in a timely fashion.

With all the information we have to date about the candidate most supportive of bike lanes it appears to be Joe Pantalone. We'll have to see how the issue unfolds in coming months.

For some news reports on last night, check out:

"Smitherman and Rossi come out swinging" (Globe and Mail)