Congestion and Commuting in Toronto 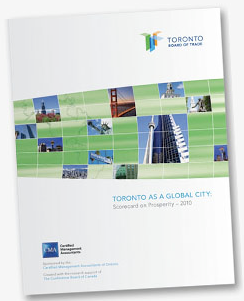 The Toronto Board of Trade recently released its scorecard report called Toronto as a Global City, which didn't have great things to say about traffic, congestion, commute times and lost productivity in the city.

The Toronto Board of Trade is "Canada’s largest local chamber of commerce, representing 10,000 members and connecting more than 200,000 business professionals and influencers throughout the Toronto region."

This study rated Toronto's economic performance and labour attractiveness as compared to 23 other world cities. While attaining an overall ranking of 4 (after Boston, Dallas and Barcelona), what made most headlines was that Toronto rated dead last for longest commute time to work. Out of the 19 cities with comparable data, Toronto ranked 19th with an overall average of an 80-minute round-trip commute.

The Scorecard also pointed out a recent OECD report that traffic and congestion on Toronto's roads costs the Canadian economy over $5 billion dollars a year in lost productivity. Instead of people sitting in their offices, they're wasting time sitting in their cars in traffic on their way to work. Recent news reports echoed this figure. Back in November, the CBC reported on an OECD report that found that Toronto lost $3.3 billion a year due to traffic and congestion on its roads.

All of this, conveniently, comes on the heels of the 2010 Ontario Budget which announced that the province would not be providing the necessary funding for Transit City to create the much needed and anticipated LRT lines across the city. Toronto is now looking at a $4 billion shortfall. (See the Globe and Mail for a news report and the Toronto Star for some commentary.)

The Scorecard showed that in Paris, for example, over 70% of people get to work by transit, cycling or walking, whereas in Toronto it's almost the exact opposite: around 70% of people commute to work by car. The Scorecard accredited Paris's well developed public transportation system and improvements to its cycling infrastructure to this trend.

So, is it too obvious to point out the problems with the the provincial government not funding public transportation in the country's largest city in light of the Scorecard and OECD report? For more insight into the issue take a read through Steve Munro's transit blog.

All of this talk about commute times reminded me of a great article I read in the New Yorker a few years back called There and Back Again: The Soul of the Commuter. Well worth the read!