In a couple of hours I have my Land Use Planning exam; so what better time to clear my head and write a new post on bike lane designs in Toronto.

I have tried to contact some folks at the City to inquire about designs for physically separated bike lanes, but I haven't received any responses yet. So what I'll look at for now are the main designs that the City uses. You can also find this information on the City's Cycling Website.

Bike Lanes:
These are your strip of white paint on the road lanes. They are meant to be for exclusive use of bikes and there are signs usually posted on the side of the road to indicate that it's a bike lane. Generally they are right up against the sidewalk, but sometimes they are placed between the moving vehicles and the parked cars. 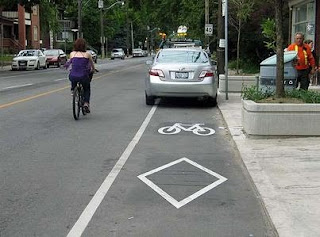 (credit: Toronto Star)
Contra-flow Bike Lane:
Same idea as the first one, but provide for cyclists to ride the opposite direction on a one way street. 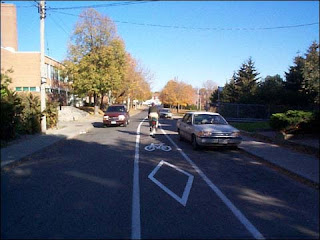 (credit: City of Toronto)
Sharrows:
This design isn't actually a bike lane.  A sharrow is white hash mark painted on a road to indicate the ideal cycling position on that road, which is usually in the middle of moving cars and parked cars. 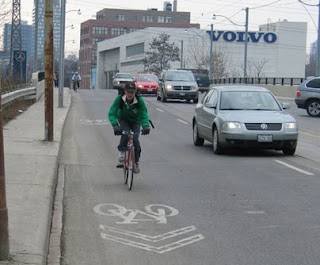 (credit: Toronto Star)
Shared Roadways:
These are signed routes which have been designated as preferred biking routes in the official bikeway network plan. There is no physical design or actual physical lane. There is simply a sign on the side of the road that indicates that bikes can ride there. 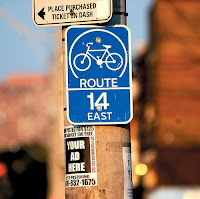 (credit: Bouke Salverda on flickr)
Off-Road Bike Paths:
These are essentially bike riding trails. They are multi-use for pedestrians, in-line skaters and cyclists. They are physically separated from cars. These are actually the best bike lanes in the city. You can find them west on Eglinton, north-south along the Humber River, east-west along the lake shore, and north-south along the DVP. They are a pleasure to ride on. 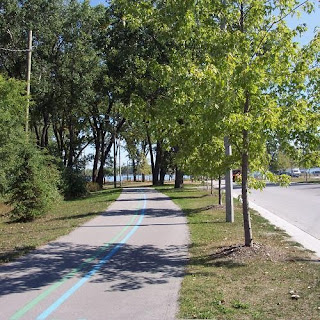 (credit: About.com)
So there you have it: bike lane designs in Toronto. In my next post I'll look at some of the problems with these designs and even make suggestions for improvements.