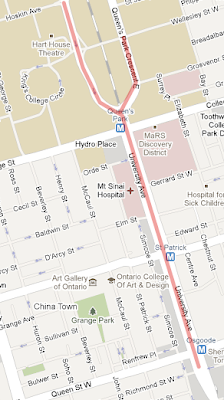 What a great surprise when I went to check the daily news and saw this headline: Dedicated bike lanes coming to downtown this summer.

According to the Toronto Star news update, the City will be embarking upon a pilot project this summer to put dedicated - i.e. physically separated - bike lanes in on University Avenue running from Richmond to Wellesley. According to the article:


Cyclists would ride in the lane adjacent to the centre median under a pilot project that would begin in July and end in September.

This is good news for me in particular because I'll be working at University and Queen and will definitely be using this new lane. Hopefully this project will be a success and spur on the movement toward better and safer cycling infrastructure in Toronto. Hopefully, as well, motorists find that they too enjoy not having to wrestle with cyclists for space on the road.

For a nice mock up photo of the changes to University Avenue under this pilot project, take a look at the post on I Bike T.O.