True, this blog is about cycling in Toronto, but, truth be told, I currently live in Windsor, ON as I finish my law degree and write the bars.

Windsor is (dare I say, was) a car city, but it does have a cycling community struggling with it's own issues as many other cities currently are.  There is a basic bike lane network made up of on-road painted line bike lanes, and other bike routes and off-road paths. Check out this nifty Google map of the Windsor bike lane network. 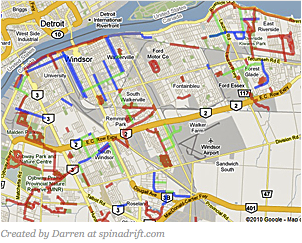 Like many cities, Windsor's bike lane network is pretty patchy, with lanes starting and ending at various places where roads narrow (e.g. on Riverside Dr.).  Interestingly, while there are many people who ride bikes (including adults commuting around town and kids hanging out at the local skate/bike park) there seems to be a lot of people who don't "follow the rules of the road". People tend to bike on the sidewalk even where that street has a bike lane, and often you'll see people biking in bike lanes but on the on the wrong side of the street.

But, Windsor does have a fairly active Cycling Committee, which works to improve cycling safety and viability in Windsor. The Windsor Bicycling Committee advises City Council and tries to engage the broader community on cycling issues. In fact, they have put together a free cycling conference to be held on Saturday, June 26 at 10am at the Faculty of Law, University of Windsor. The keynote speaker is going to be Ben Gomberg, who is the Cycling Coordinator for Chicago.  Should be great! See the below picture for registration information. 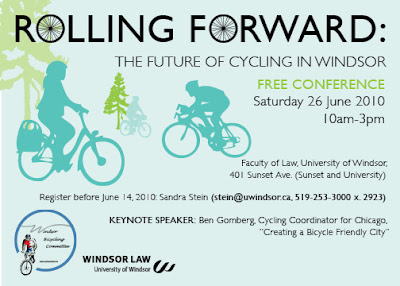 Windsor also has a great community cycling blog, called Bike Windsor, where you can find loads of information about up-coming events, as well as general discussion on cycling issues in Windsor.

The best place to bike within the City, from my experience, is the great path that runs along the Detroit River.  There is a nice sculpture garden and a great view of downtown Detroit.

So, bike on Windsor!