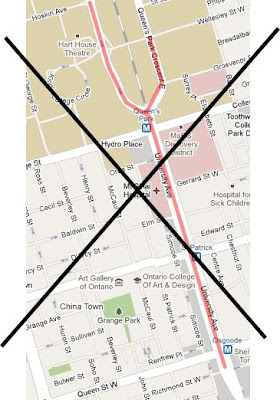 City council voted last night 15-13 against the proposed dedicated bike lane on University Avenue which was planned as a pilot project this summer.

The City vote was was part of a larger vote to broaden the Bike Plan, which passed.

Councillor Paula Fletcher voted against the proposal by mistake. An attempt to have a re-vote failed because, apparently, the voting rules don't allow a re-vote when it would change the outcome of the final decision.

If Fletcher had voted as she intended, then there would have been a tie, which, in this case, because the vote on the proposal was an amendment to the larger vote on the Bike Plan, would have settled in favour of passing the proposal.

Read all about it in the Globe and Star.