G20 and the use of police bikes against protestors

It's not the first time, but during the week leading up to and the weekend of the G20 in Toronto, police officers used bicycles as one more tool in their arsenal of repression.  The fact that many of the 19,000 officers on guard that weekend rode bicycles or used them in various ways is nothing surprising since Toronto police officers often use bicycles as their official daily means of transportation. Perhaps it was the sheer scale of the "security" apparatus that weekend that made the presence of so many bikes particularly troubling. In addition, police officers used those bikes in ways that would make many bike riders cringe. Bicycles are more often thought of and used as instruments of liberation: freedom to move around the city easily, a cheaper transportation alternative for people of modest means, an independent mode of transportation for teenagers and younger kids, freedom from cars and so on. But, unfortunately, on the G20 weekend bikes were used as instruments to control and suppress our freedoms: freedoms of assembly, freedoms of speech, freedoms from arbitrary detention and so on.
Below is a montage of video footage taken by a friend of mine from the G20 weekend of police officers and their bikes.


I was present at the demonstration on Friday afternoon and again on Saturday as a volunteer legal observer.  What I saw was that, for the most part, police were using their bikes to create walls and barriers in order to contain the demonstrations within a designated place, funnel demonstrators along certain routes, and sometimes to completely surround and detain people. As one clip in the above video showed, one technique was to bring their bikes up on the back wheel (like a horse on its hind legs) to create a more aggressive stance and posture. One problem with the police tactic of using their bikes to create a wall on the periphery of a given march was that it made it often difficult for protesters to leave the protest (There seemed to be a policy that if a person decided to exercise their rights to assembly and speech by being at the demonstration he or she was accepting a de facto possibility, or likelihood, of being surrounded, arbitrarily detained, beaten up, and arrested by cops. That is, if you come don't expect to leave.) 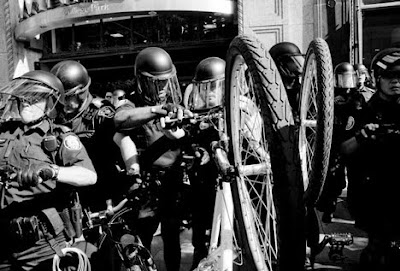 (credit: TreeHugger/blogTO)
Check out TreeHugger for a interesting article on the use of bikes at the G20 with lots more photos like this one above.  Also, BlogTO has a post of many good G20 photos including the one above.

On Sunday, people took back the streets with their bikes in a critical mass/"bike bloc" action. Below is one of many videos capturing the event.


Here is some reporting on the event by the Globe and Mail and pictures from CTV and Rabble.  Like most demonstrations that week/end, things did not end well for everyone. One Bike Pirate volunteer who was part of the critical mass action was brutally beaten up by police and arrested.  You can find his first person account over at I Bike T.O.  Here is one passage from his account:


I was now on my stomach with my arms restrained behind my back with my face being pushed into the street under the knee of another police officer. A large group of police set up a line of police bikes to stop onlookers from getting a clear view on what was taking place. The police threatened the witnesses with arrest under the charge of obstruction of justice. As the beatings continued the officers repeatedly kneed me in the head, lower and upper back. There is heavy bruising around my right shoulder, cuts and bruises on my right knee and right elbow and my chin has a large cut that likely needed stitches. As I was being beaten, I cried out in extreme pain, “Stop the insanity.” 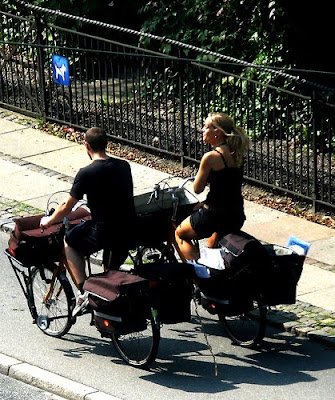 (Royal Danish Post custom bikes. Credit: Cycle Chic)
I think it would actually go a long way to "normalizing" the use of bicycles in any city for public institutions to require workers to use bikes as part of their job and daily work routine.  Not only that, but it can create a great demand for the local economy. In Toronto, Urbane Cyclist, which is a worker run co-operative, builds and services Toronto Police bikes.

The aftermath of the G20 is just starting to take shape in terms of calls for a public inquiry and other forms of legal action to redress the police brutality and violation of cherished Charter rights that took place that weekend.  In the mean time, go for a nice relaxing ride on the soon to be finished Jarvis St. bike lanes!

No Justice No Peace.