I'm all for road safety, but I'm not sure that a city-wide ticketing blitz by the Toronto Police is the best way to achieve it.  According to a recent Toronto Star article:


Police handed out more than 400 tickets to cyclists and pedestrians in a three-day safety blitz in the area between the DVP and Victoria Park Ave. and south of Eglinton Ave. W. Police cautioned an additional 250 people on bike and foot leading up to the blitz.

Apparently this isn't the first time.

First, I highly doubt that most cyclists (or pedestrians) have a comprehensive knowledge of bike traffic laws and potential violations.  True, ignorance of the law is no excuse, but it is the reality in many cases.  So the real issue becomes one of education, which is a responsibility of the government.  In Denmark, children are taught how to ride bicycles in primary school and are taught the rules of the road and must pass a cycling test.  It is an effective way to teach everyone about cycling and about the law.  Toronto does have a cycling training course called CAN-BIKE, which will teach children and adults about road safety and traffic laws, but it is a voluntary program.  While integrating bike education into primary school is a good idea, this is by no means an argument in favour of requiring bike licensing.

Pop quiz: how many bicycle laws/violations are there? How many can you name?

Answer: download a table of all possible bicycle violations. 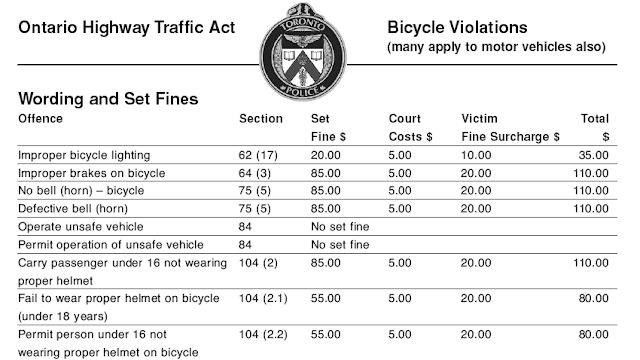 For the legally inclined, you can also find these laws in the Highway Traffic Act. As the above pic indicates, many of these laws also apply to cars.

Second, it's not clear that all of these bike laws even make much sense.  Running a red light, fine; but, ride 2 on a bicycle? Actually, the Highway Traffic Act is a bit clearer on this point. It reads:

This likely allows for a parent to ride with her children:
But, it almost certainly does not allow for this: 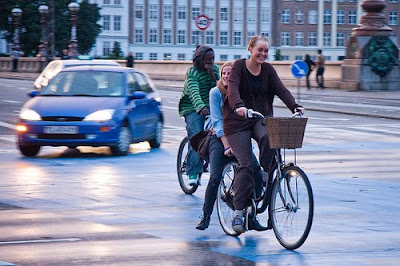 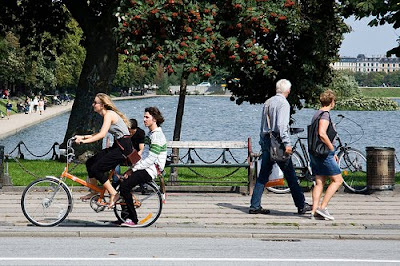 A perfectly common way to put a second person on a bike in many cities across Europe is a quasi-criminal act in Ontario.

Third, enforcing quasi-criminal laws by having police engage in ticking bonanzas is really a reactionary, tough-on-crime policy operating under the guise of "safety." In many ways it's a political move in the same vein as the Safe Streets Act, which provides police with greater powers to repress homeless and poor people using the rhetoric of making our streets safer (for who?).

My point is that if the police, or the city, or the province were really interested in making roads safer for everyone, then they would do two things: first, affect a political and policy shift in terms of how we address issues of road safety; second, build a functional network of separated bike lanes.  The first "political" solution addresses the underlying ideology of how we frame issues and engage with social problems; the second "technical" solution looks to designing a safer environment for all users of the road so that ticket bonanzas aren't necessary.

So, advocate for complete streets and don't vote for Rob Ford.

Until then cyclists: ride safely, be courteous to other users of the road, and beware!