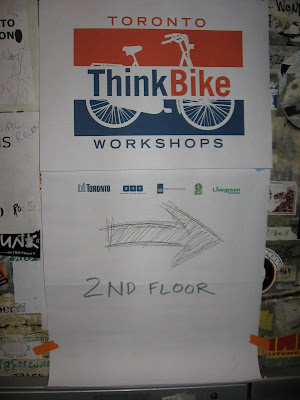 Earlier this evening I had the opportunity to attend the Think Bike Workshop at El Mocambo.  The City of Toronto and the Consulate General of the Kingdom of the Netherlands played host to Dutch bicycle planners yesterday and today.

Yesterday and earlier today these Dutch bicycle planners worked closely with city planners and community cyclists to tackle two main projects.  The Blue team (blue being the official corporate colour of Toronto) was tasked with developing a cycling network in the downtown core.  The Orange team (orange apparently is the colour of the Netherlands) took on the project of redesigning the Sherbourne street corridor.  To find out more about this you can visit the Think Bike page on the City of Toronto website.

The purpose of this event was to showcase the results of these two workshop projects.  Representatives from each team took the stage to report back their conclusions, designs, observations, and recommendations.  Before the official speaking began, audience members had an opportunity to view the workshop results which were tapped up on the walls.  These included pictures of proposed changes; charts and bullet lists of strengths, potential problems, strategies, etc.

Each group went up in turn and, for the most part, we were given presentations by the Dutch bicycle planners.  The blue team envisioned a downtown bike network that filled in the present gaps in bike lanes, created several north-south and east-west cycling corridors, and, best of all, displayed four different ways to re-imagine/create complete streets in Toronto.  Most of these involved some set up of separated bike lanes, green space, sidewalks, and car lanes/car parking.  In particular, the planners spoke of the need to create "safe cycle routes" which would be these types of separated bike lanes.  These lanes are particularly important for getting new cyclists on the road who may otherwise feel unsafe riding in current conditions.

The blue team completely redesigned Sherbourne street with separated and painted bike lanes, bike boxes at each intersection, accommodations for pedestrians getting on and off busses, etc.  It was an excellent attempt at providing a detailed plan for a complete street design.

Questions from the audience touched on the issues of giving cyclists a unique legal status (i.e. different from both pedestrians and cars), cycling in Toronto's winter climate, politicians in the upcoming municipal elections who may bring with them strong political vision for cycling in Toronto, etc.

The evening and workshop was a success in terms of taking in the expertise and recommendations of the Dutch bike planners.  They made many great points for us to incorporate in our next bike plan including: integrating transportation planning with city planning, re-conceiving of possible street designs, connecting up public transportation with cycling, marketing cycling to the public, integrating cycling education into primary schools, etc.

At the end of the evening, one of two hosts, who is the head of cycling infrastructure (or something like that) at City Hall put it well: it's not for a lack of ideas, the question is one of money and political will.

(Sorry for the lack of photographs; I'm still getting used to whole reporting/blogging thing.)