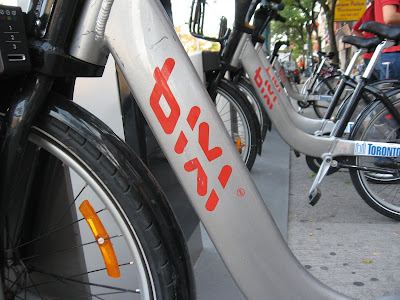 As you may already know, the City of Toronto is considering investing in and bringing BIXI bikes to Toronto.  Last night outside the Think Bike workshop the Toronto BIXI team set up a booth in their bid to sign up 1000 members before the November 30, 2010 deadline.  The City requires that 1000 people sign up by this date in order to show a minimum level of interest to make the investment worthwhile.  To get the official scoop, check out the Toronto BIXI website.  It costs $95 to become a member for a year and additional charges depending on your usage of the bikes. 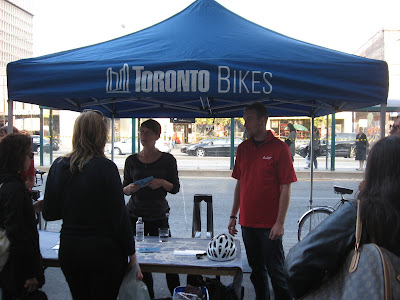 BIXI, which stands for Bike Taxi, is a public bike sharing program.  There are many different companies that manufacture public bikes and operate such systems around the world.  BIXI is owned and operated by a private, not-for-profit firm called Public Bike System Company (PBSC) which is based in Quebec.

To design, engineer, operate and source raw materials, PBSC works with several other individuals and companies. Michel Dallaire, an industrial designer, designed the component parts; Cycle Devinci, a firm of mechanical engineers, manufacture the bikes; Morrow Communications takes on marketing; and 8D Technologies builds the automated machines and parking systems.  In addition to this, PBSC gets its aluminum from its title sponsor Rio Tinto Alcan, the world's largest aluminum/aluminium company. Depending on your politics, this last partner may not be much of a selling point. 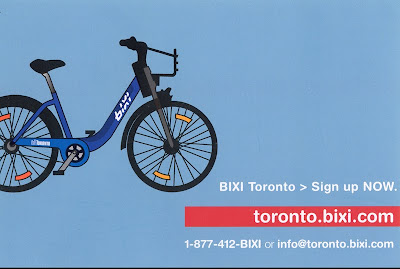 The BIXI system is brought to municipalities around the world by PBSC who enters into a cost sharing arrangement with the municipality to launch and operate the program.  In Canada, BIXI was first launched in Montreal in the spring of 2009.  The City of Toronto started looking into BIXI in 2010 and plans to enter into a 10-year agreement with PBSC to be launched May 1, 2011.  In a document from the Public Works and Infrastructure Committee of a meeting held on April 20, 2010, the proposed financial arrangements and obligations are detailed.  A summary is quoted below:


City staff and PBSC have negotiated the draft terms of an agreement whereby PBSC would enter into a 10-year agreement with the City to be launched May 1, 2011.  When the program is deployed, Torontonians and visitors would have access to 1,000 bicycles via 80 fully automated and conveniently located “bicycle parking stations” in the downtown area during the first year of operation with the potential to expand the system to other areas in the future.  PBSC would be responsible for the $4.8 million capital investment to manufacture and install the public bicycle infrastructure and for the operation of the program, and the estimated $1.3 million average annual operating cost. In return, the City would provide a loan guarantee to assist PBSC in securing favourable financing.  The City would be responsible for the cost of replacing the bicycles and stations due to vandalism and theft in excess of a six percent threshold.

All of this, apparently, is conditional upon signing up 1000 members before the November 30, 2010 deadline. 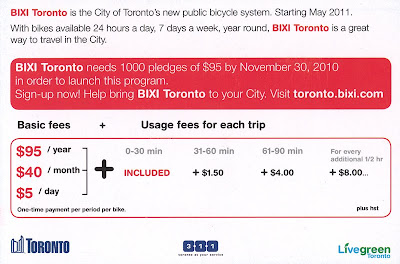 Public bike sharing programs have been a great success in many cities around the world.  It makes cycling an easy option for those who may not own a bike or who are only interested in short cycling trips around the city.  Public bikes come in handy for filling the gap between public transportation and the remainder of your journey, visitors and tourists, and even those of us who have bikes but might find ourselves without it from time to time.  In fact, yesterday I asked the Toronto BIXI rep why I or someone else who already has a bike would become a member.  Two main situations, she answered: First, I may be out without my bike - for example if it is raining in the morning and I decide to take the TTC but it clears up at the end of the day; Second, I may have a visitor in from out of town who wants to ride along with me. Pretty good scenarios.

There are potential problems with BIXI and any public bike sharing program though.  Vandalism and system failures of the automated machines and parking systems have been noted in some situations.  In these cases, the City and BIXI would be responsible, respectively.

Either way, having more bikes on the road is a good thing.  There is power in numbers both in terms of creating a critical mass of cyclists for presence and safety on the road and for improving the political will for other cycling needs like infrastructure and education.  It will allow people who don't usually ride a bike to pick one up from time to time and experience how the city opens up and becomes a far easier and enjoyable place in which to get around.  (Not everyone has to be a yearly member.)

While I don't expect to ride BIXI bikes all that often (granted I was told that the yearly membership pays for itself if you ride two times a month), I am thinking seriously of becoming a member just to help achieve the 1000 member mark and make the project a reality.  So should you!

(Disclaimer: I don't work for, nor am I being compensated by, PBSC or the City of Toronto.)