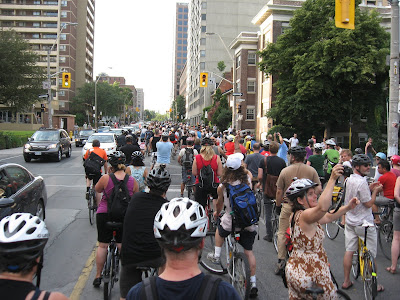 The Toronto Cyclists Union organized this great ride. Around 1,000 people met first at Allan Gardens for a rally with words from the organizers, councillor Paula Fletcher, and councillor Mike Layton.


More demos are being planned with the goal of getting bigger and bigger crowds of cyclists out on the streets. Also, a call was put out for critical mass rides, which occur in Toronto the last Friday of every month at 6 p.m. starting at Bloor and Spadina.

There was a lot of media out covering the ride. Check out the news stories from City TV, the Toronto Star, and a video report from the Toronto Sun. Tweeting was going wild over at #bikeTO.

Also, Cycle Toronto finally has some pictures up on flickr and you can see the Ride for Jarvis set.

Thanks to the TCU. Now's a great time to sign up as a member and get involved.