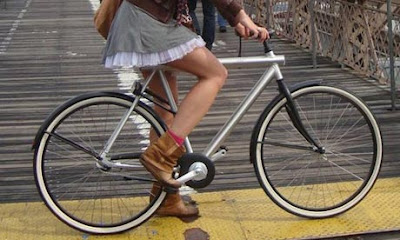 This is the story of Jasmijn Rijcken, a Dutch woman in NYC to promote Vanmoof bicycles, who alleges she was stopped and harassed by a NYC police officer for wearing a skirt while biking. Apparently this can be dangerous and distracting to motorists.

This story has been picked up by, reported on, and blogged about by many so far and I won't attempt to repeat it. Take a look at these links for the background:
This isn't the first time the NYPD has sought to ticket a cyclist for perfectly legal behaviour. Not too long ago I blogged about a cyclist in NYC who was ticketed for not riding in a bike lane. He made a great video about it.

In response to this madness, protest rides were organized. They've been dubbed 'Skirts on Bikes' rides.

Check out the Village Voice and the Gothamist for more on the protest rides.